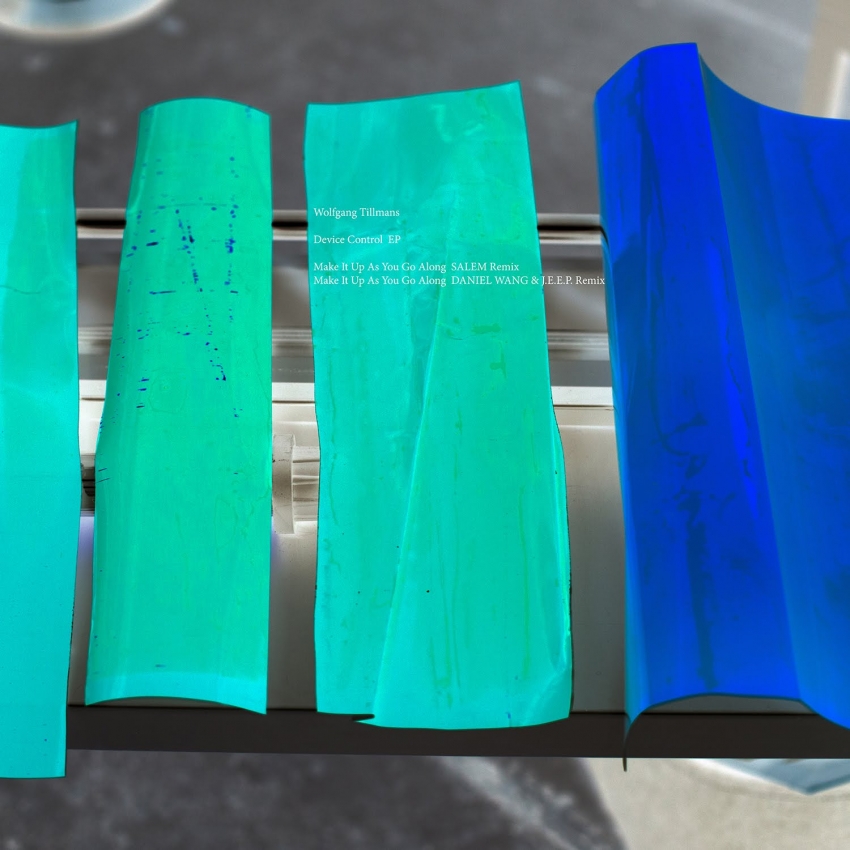 Device Control EP, the second release by Wolfgang Tillmans, is a double Aside 12'' and digital release, featuring two new songs and three remixes of his debut Make It Up As You Go Along. One remix is by legendary US band, Salem, the other two by Berlin based American/French producerDJs, Daniel Wang & J.E.E.P.

The title track Device Control opens with a stunning kaleidoscope of synths by Kyle Combs (New York) leading into the bouncing, hypnotic main body of this 134 bpm dance track, which Tillmans worked on with Tim Knapp at Trixx Studios Berlin. Additional live drums are by Rosie Slater of New York band, New Myths. The lyrics are made up of faux smartphone adverts about the supposed possibilities of streaming one's life. The song was written and recorded in one take with an iPhone voice recorder followed by
various stages of production in Berlin and New York.

Angered Son borrows a single line lyric from a New York Times article about the perpetrator of the Orlando shooting: 'His son had recently been angered by seeing two men kissing'. In two different a cappella versions, the looped and sampled vocals recall songs in the round style.

The AA side is devoted to three outstanding remixes of this summer's Make It Up As You Go Along. In what amounts to something of a music world sensation, Tillmans was able to win Salem's Jack Donoghue and John Holland as contributors, it being their first released music in five years. In their signature style, the 2'45'' short track is a strong abstraction of the original, leaving just the basic harmony in place while creating an intense piece of draw and pull.'I feel there is the same kind of magic or draw coming from the bayou and where we were staying in Montegut, Louisiana, so it's nice to think we maybe tapped into that' John Holland.

Daniel Wang & J.E.E.P. have created a remix and a dub of Make It Up As You Go Along which will undoubtedly leave its mark on the house dance floor. They added addictive arpeggiators, turned the bassline over into a warping warm 303 groove, and slowed down the track to 117 bpm. The fast arpeggiators meanwhile give an uptempo feel to the groove. In addition to the existing vocals they sampled Tillmans' vocal line 'What we do here is a crime in most countries, but it's not. There is no
victim. Leave us alone' from his Triangle / Gong / What track. The line references a number of activities and pleasures we indulge in, on a good night out.

The EP was recorded and mixed this spring/summer in Berlin, New York, and Louisiana, possibly capturing a sense of time and place of where we are.

The record sleeve and inner sleeve were designed by Wolfgang Tillmans.
Videos directed by Tillmans will be released for Device Control and Make It Up As You Go Along - Salem Remix.