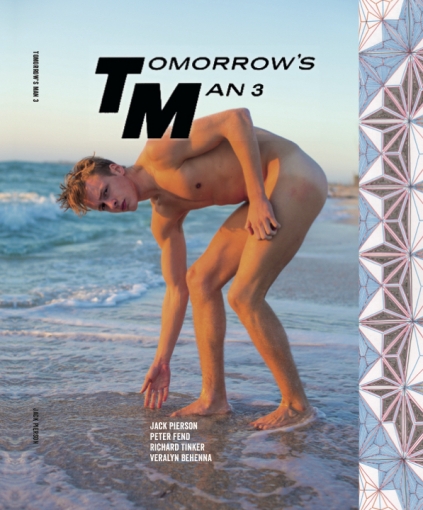 Edited and designed by Jack Pierson and Roger Bywater.

This book is the third volume in Jack Pierson’s ground-breaking Tomorrow’s Man series, in which the artist has assembled an art-fueled creative collaboration that harkens back to the thirteen volumes of The Yellow Book published between 1894-1897. Whereas the first two Tomorrow’s Man volumes implied an increasing density of layered imagery and over twenty-five artists, Tomorrow’s Man 3 amplifies the work of just four artists. Richard Tinkler’s delicate geometric abstractions are highlighted once again, working in concert with Pierson’s recent series of figure studies; activist text works by Peter Fend that cry out for environmental justice; and a short story by Veralyn Behenna entitled ‘The Flavor of Your Wish’ in which an expatriate woman contemplates masculine beauty in a Grecian taverna. This is the first time Tomorrow’s Man has included previously unpublished work by Pierson.

Woven into a poetic framework of connections, the resulting narrative takes the Tomorrow’s Man series into new terrain that combines the vernacular of classic photography with the urgent, geo-political narratives of Fend’s texts, and the psychedelic reverberations of Tinkler’s drawings. The result is a publication that is itself a collaborative work of art which, with Pierson’s creative hand, manages to highlight each contributor, while simultaneously melding everything into a sophisticated mediation on culture and nature.